I have conquered my first month with the Peace Corps.

So much has happened since the last time I posted.

I was sick for 2-weeks with a sore throat and awful congestion. It made something as simple as getting out of my sleeping bag an unpleasant ordeal. By the 8th day when I realized that I wasn’t getting any better and it became painful to swallow food and drink, I had to call the Peace Corps Medical Office (PCMO). Dr. Maya saved me and I can now walk to school without feeling exhausted. In addition, I was feeling homesick but now I feel more comfortable with where I am…although I could live with less spiders invading my house.

Twice has my soum been hit by rainstorms. And both times we lost electricity. My little house even suffered from some flooding but my host parents were amazing and took quick care of it. The first storm came after a hike I took with 4 PC friends.

As we were coming down from the mountains and were re-entering our soum, little raindrops escalated into a fierce thunderstorm. I knew I would get drenched as I was still a 30-minute walk away from my house when suddenly, there was a honk. A white car was waiting up ahead – my host parents! I don’t know how they found me or if it was purely by accident, but they saved me from turning into a drowned rat. Mongolian parents have a sixth sense about their children or they just called around the town asking, “Have you seen the Americans?!”

My host family also took me out in the country to visit “my” grandparents. We all sat outside for dinner. What was for dinner? Well, let me tell you. Someone slaughtered a goat – (glad I was not there for that part) – and wrapped the bones and meat into a dough-like blanket. Potatoes and carrots were also added into the mix. Then the blanket was put in a pan and set upon an outdoor fire and left there for a couple of hours. When the meat was ready, the dough was pulled away to reveal all the meat. 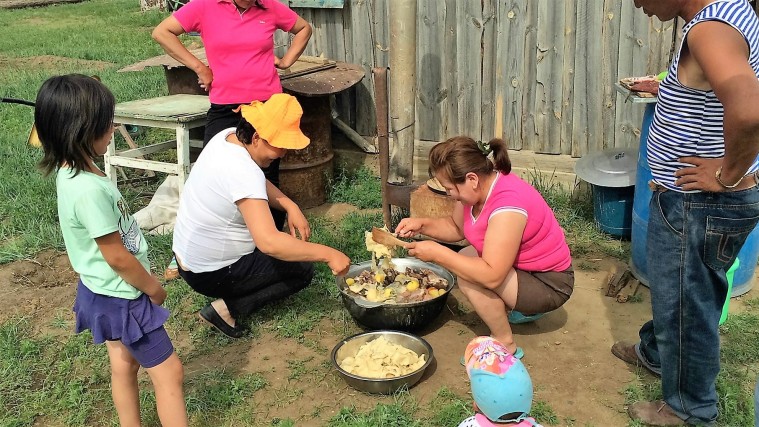 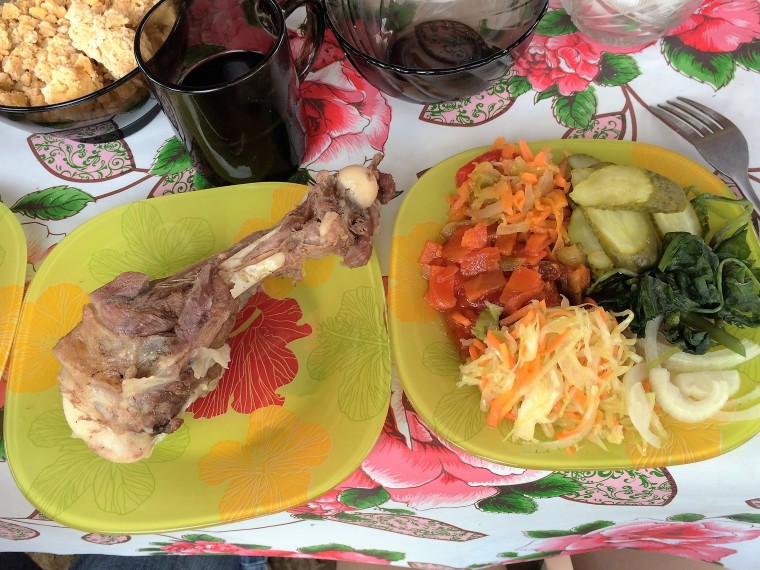 Mongolians are meticulous when eating their meat. Like eating ribs, they eat everything off the bone – (yes, even the fat) – until there is nothing left except for glistening white bones that get thrown to the dogs. Some even crack the bone in half to drink the marrow inside. I refuse to eat the fat. I also had my first taste of Mongolian made vodka. Not a fan. It tasted buttery but even if you don’t like it, you must take at least one sip to show respect.

The vodka was poured into a copper bowl which is then passed around to everyone at the table. I followed the example of putting my ring finger into the bowl and then flicking Vodka drops into the air. One flick for the past, a second flick to the present, and a third flick for the future. After our dinner, we played basketball – (with a soccer ball, I might add) – and went swimming in the river. It was a perfect day.

29 June was Mongolia’s Election Day. Peace Corps is forbidden to talk about politics or be in or around polling houses, so I’ve kept a tight lip since my arrival. The day was considered to be a holiday so there was no language class or afternoon classes. I saw many people dressed in their finest with older folk wearing traditional garb.

Micro teaching is now over. In July, we will now be practice teaching. In new groups of 3’s, we will teach 8 times throughout the month, to a variety of grade levels. The stakes are higher with more intensive lesson planning and more thorough evaluations. For our first two lesson plans, Peace Corps officials came to watch. We have also begun our community outreach program. After interviewing our host parents and after translating their Cyrillic script with the aid of our language teacher, we unearthed what the problems are in our town: poor dental hygiene, too much trash being thrown on the ground, not enough space in Kindergarten rooms for more children. They want a fitness center, indoor toilets at the school, better roads, drinking water in the school and more. Obviously, we can’t do anything about a fitness center, indoor toilets, or the roads. But we have come up with an excellent, long-lasting idea that we hope gets approved by Peace Corps.

July will definitely be a busy month. I only have a month left until my swearing-in ceremony. It will be exciting to transition from a Peace Corps Trainee (PCT) to Peace Corps Volunteer (PCV). I’ve received packages from my parents. My spirits soar every time I see someone walk into the room announcing, “Package for Anna!” Except one package was accidently sent to Singapore. Oops. Next time I update, I hope I will be wearing my own deel and telling you all about the Naadam festival that is in July.

One thought on “One month wih the Peace Corps”