Packing for two-years of your life is tough. I can still vividly remember back in May 2016 when I spent all week in my basement attempting to sort out all my stuff. Clothes were strewn everywhere and piles of miscellaneous were scattered all over the place. I even had my mom come down and I would hold up a t-shirt or a dress and ask, “Yes? No? Maybe?” In the airports, people went around me like I was a rock in a stream. No one wanted to mess with me as I struggled with over a hundred pounds.

There is no right or wrong answers when it comes to packing. Bring what you think is necessary and important for you. Packing lists you find online only proved to be a little helpful for me. Thus, you will read a snippet of what I packed to avoid a nervous breakdown.

There is not much out there about Mongolia. When  standing in the travel section in a bookstore, there were 30 books about China, 15 about Japan, and 1 – if you’re lucky – about Mongolia. But guess what? Mongolia pretty much has everything! During your first three months of service, you will be under a travel ban but Peace Corps does give permission if you need to go to UB for something crucial such as winter clothes or a broken computer. If you live in a small soum, you can travel to your local aimeg.

What am I most grateful for?

What do I have that is necessary?

What did my parents send in care packages?

What do I wish I could have packed but had no space for?

What will Peace Corps give you?

What was I able to buy in Mongolia?

Don’t change your style while packing. If you prefer dresses over pants, pack your dresses. If you like nail polish, pack your nail polish. Don’t pack what you would never catch yourself wearing in the States. The same for hobbies. If you have never knitted a thing in your life, don’t pack up extra space with items you might never use. If you think you can sacrifice your winter coat for something else more important, go for it. If you have never kept a journal, don’t feel compelled to bring a journal. If you love coffee, bring a  french press. If you like wearing high heels, bring your best pair.

So, relax, breathe, and remember, you are all in the same boat. You’ll have funny stories to retail. Most of all, don’t freak out and compare what you are packing to somebody else’s. All will be well.

Feel free to ask any questions.

Mongolians sure know how to put on a performance. A night of dancing and singing in traditional Mongolian dress. 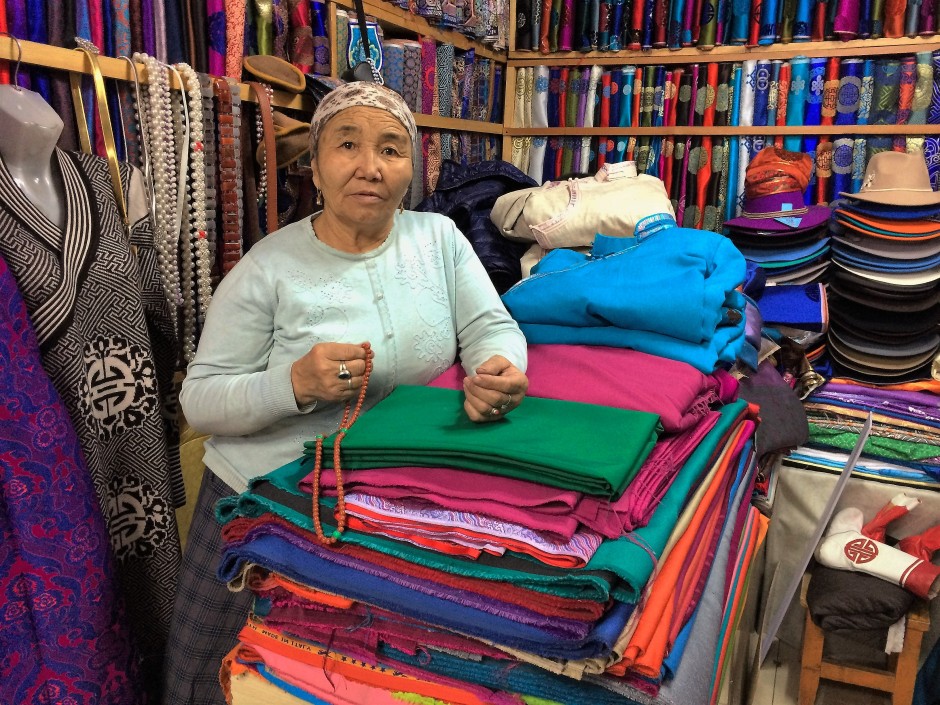 If it weren’t for Chinggis Khan and his Golden Horde that took the world by surprise in creating the world’s largest empire, the world might know absolutely nothing about Mongolia. Dwarfed between two colossal sized countries, China and Russia, Mongolia has quietly endured its own ruthless past that came to an end when the Soviet Union collapsed in December 1991.

Since arriving in Mongolia in May 2016, I have encountered and participated in many Mongolian traditions and customs such as drinking milk tea, eating Mongolian food, playing shagai, partaking in the Nadaam festival, and buying and owning my own deel.

For this post, I will focus on the Mongolian deel. For centuries, Mongolians have worn deels. With a sheep- wool lining inside, deels have kept Mongolians warm during the harsh winters. Easy to put on, a deel can be pulled over and pulled at the waist using a belt and small clasps on the side.  You can find deels in a variety of colors. Most notably are the colors blue, red, yellow, green, and white. Blue represents Mongolia’s blue sky. After all, Mongolia is known as the Land of the Eternal Blue Sky. Red symbolizes fire; white symbolizes milk; green symbolizes the Nine Stones; yellow is a symbol of the Dali Llama’s yellow robes.

The Buddha’s followers compiled his teachings into books – most notably, the Kangyur. In the 1650s, the Mongolian monk, Zanabazar, brought a collection of the Kangyurs into Mongolia from Tibet. Today, 10 different types of Kangyurs are safely preserved in the National Library of Mongolia. One notable copy was written with 9-precious stones: gold, silver, corral, pearl, mother of pearl, turquoise, lapis lazuli, copper, and steel. All stones were crushed into a powder and mixed with water and goat’s milk for ink.

Now in 2016, deels come in an assortment of patterns, some subtle while others can be very eye-catching. Some possess intricate details on the sleeves and collars, can have wide sleeves or thin sleeves, and more colors have been introduced such as purple and pink. Styles have also evolved from the traditional Mongolian deel to a more Chinese inspired deel.

There are many different types of deels distinguished by its cut, color, and trimming. Each ethnic group has their own type of deel. They can be long or short. They can be one piece or two piece and made from different materials. Silk from India, Japan and China are popular. Most notably are the winter and summer deels. Winter deels are thickly padded to keep out the chill. 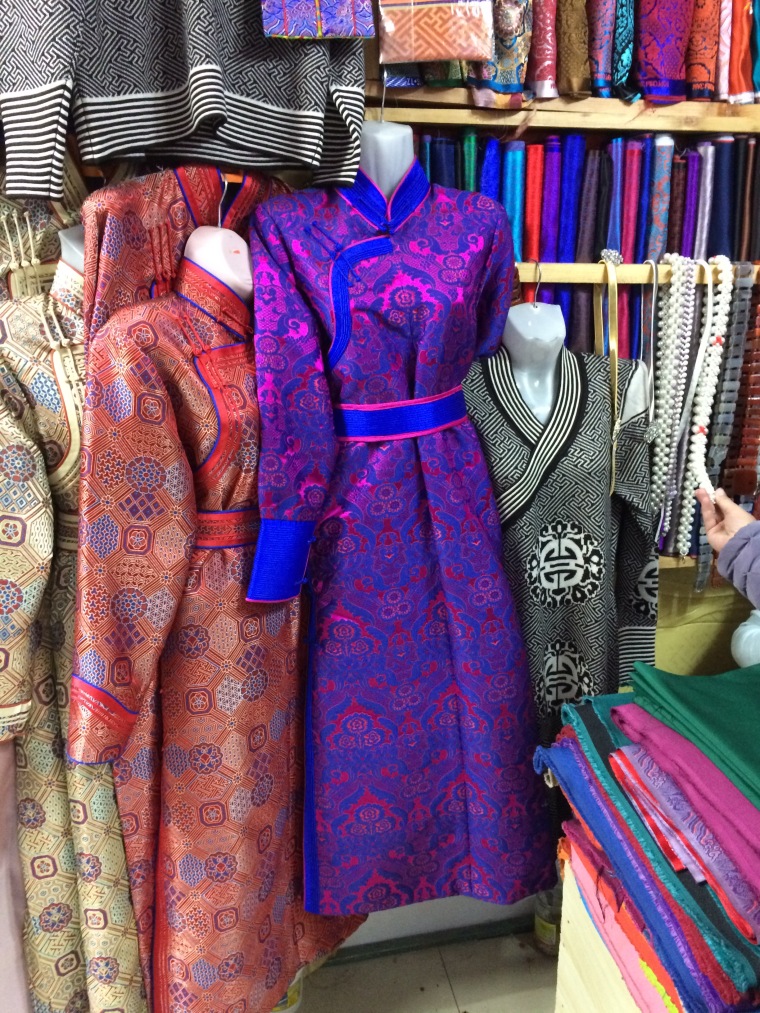 On the second floor inside an old building in the market, I found Nachagnyam’s deel store. She has been making deels since 1992. She learned the skill from her mother. Beginning first with smaller deels for children, called a баривч (barevch), she has worked herself up to making a variety of deels for everyone. Now she works with a team of young women. When I asked how long it takes to make a deel, she said that it can take one to three days depending on the style. Nachagnyam then said that she wants to see more people wearing deels, most notably the younger population. In a much smaller deel store, Yanjmaa also believes more people should wear deels. She claims they are necessary for survival and a deel belt can keep a person’s stomach and kidney warm.

In Ulaanbaatar, it is seldom when you see a person walking down the street in a deel. Now, it is usually the herders and folk from the county side who wear a deel. With Ulaanbaatar undergoing much construction in becoming a modern city, a gulf has opened between the modern age and the traditional age: from living in gers to moving into houses and apartment buildings. From wearing deels to sporting western clothing. However, Mongolians haven’t entirely severed their ties to their country’s history. During major holidays, such as Naadam and Tsagaan Tsar, Mongolians return to their roots and pay homage by wearing deels while celebrating with friends and family.

My blog post is based on my previous knowledge from what I have read about Mongolia, what I have seen during my stay, and from what I have heard when speaking to Mongolians. This is not intended to be a thoroughly researched article but something that I wanted to do due to my own fascination and interest. 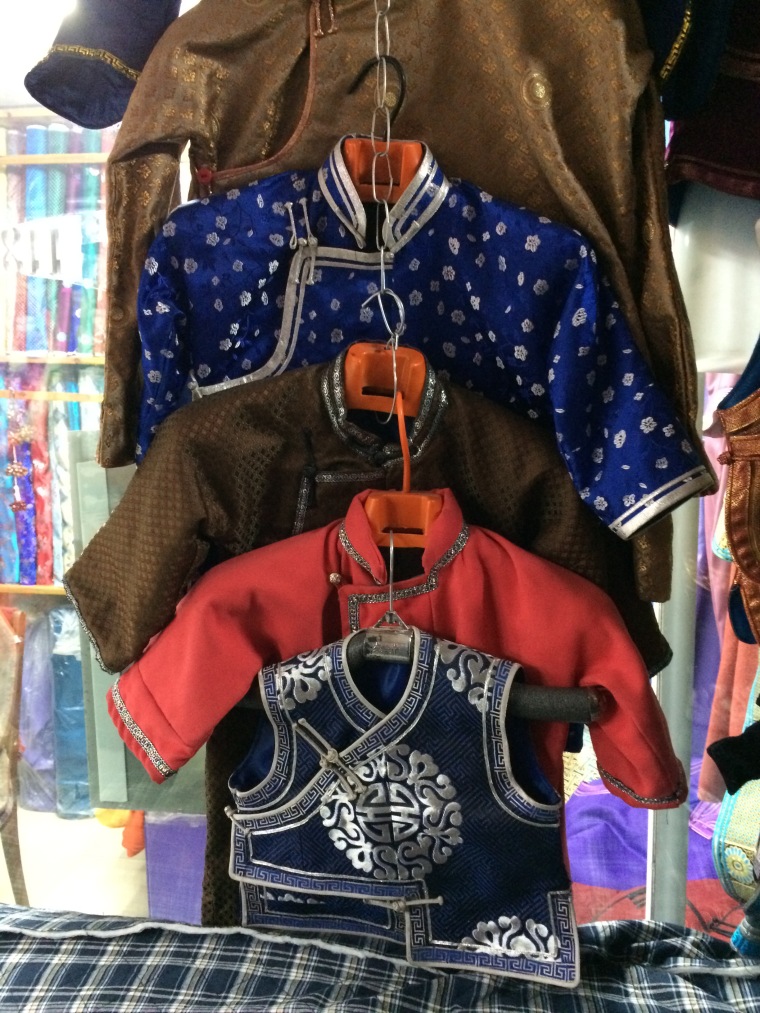 I hope everyone had a lovely turkey day! I on the other hand, felt very ill and was coughing up a lung by the time Thanksgiving rolled around but I managed to roll out of bed to celebrate. On 23 November, my site-mate Jenni hosted a Friendsgiving at her apartment. We managed to squeeze 12 people into her small apartment. This was only done by lifting Jenni’s mattress up against the wall, bringing an extra hot plate, stools, and having her counterparts bring their own bowls and forks. For the third year in the row, I was in charge of the mashed potatoes – mainly because I might poison all 12 people if I bake or cook something.

Then on 25 November, we hopped onto a bus from Ulaanbaatar that took us west to Bayankhongor. We felt like hitchhikers as we waited with our backpacks at a gas station for the bus. Another Friendsgiving was held that weekend as we celebrated with our friends, sang karaoke, went dancing, and saw some dinosaurs.

At the beginning of December, all Peace Corps Volunteers and our counterparts traveled to UB for an In-Service Seminar held at the Park Hotel. The purpose of this? To strengthen work relationships between PCVs and counterparts. Our schedule was packed leaving no time to venture outside. We had Mongolian language class; TEFL (Teach English as a Foreign Language) training; various sessions such as critical thinking in the classroom, running camps and clubs, classroom management and interaction, empowering people with disabilities, and gender equality and empowerment, plus many more. Sometimes we were together with our counterparts and often we weren’t. This went on every day from 7am to 7pm. I also still had my cold and was coughing incessantly. So much that I pulled a muscle.

It was an exhausting week with some wonderful moments:

Now I’m excited for Christmas. I went on a wild goose-chase as I searched high and low to find Christmas lights in my aimeg. I got lost in a labyrinth-of-a-building and when I finally found an exit, I saw a man selling lights at his stall right outside. Now, my apartment is twinkling with red, blue, and green lights hanging over my window and bed. My stocking is hanging on my door and my advent calendar from home is propped up on my coffee table.

Good things have happened but I have had my frustrations as well. Let me first tell you about my apartment. The repair man has become my new best friend. He has had to replace my radiator which exploded while I was away in Khentii and then he had to replace a radiator in my bathroom which exploded while I was away in Bayankhongor. Then when I came back from UB, my bathroom was leaking again. Notice a trend here? I finally told the repair man to just switch off the heating going into my bathroom because I just can’t be bothered anymore.

An immigration officer paid me a surprise visit at my school. She demanded my passport and my alien card. Like I just casually carry my passport around wherever I go. Then she said that she wanted to take it away with her to which I firmly said no and made her take a photocopy instead.

Trainwreck was an awful movie. So much hype of people telling me how funny Amy Schumer is.

I get really depressed when I see injured dogs and puppies limping on the streets.

“As long as you live, there’s something waiting; and even if it’s bad and you know it’s bad, what can you do? You can’t stop living.”

I have sometimes thought to myself, “What is the point? I can just go home.” But I like it when tiny 5th graders come running out of their rooms to say “Hi,” when I walk by. I like it when students wave at me when I’m outside. I like it when I witness a counterpart doing a good job in the classroom. The best thing that can happen is when lesson planning goes well. Lastly, I am happy for the friends I’ve met and all the phone conversations we have when we’re apart.