I hope everyone had a lovely turkey day! I on the other hand, felt very ill and was coughing up a lung by the time Thanksgiving rolled around but I managed to roll out of bed to celebrate. On 23 November, my site-mate Jenni hosted a Friendsgiving at her apartment. We managed to squeeze 12 people into her small apartment. This was only done by lifting Jenni’s mattress up against the wall, bringing an extra hot plate, stools, and having her counterparts bring their own bowls and forks. For the third year in the row, I was in charge of the mashed potatoes – mainly because I might poison all 12 people if I bake or cook something.

Then on 25 November, we hopped onto a bus from Ulaanbaatar that took us west to Bayankhongor. We felt like hitchhikers as we waited with our backpacks at a gas station for the bus. Another Friendsgiving was held that weekend as we celebrated with our friends, sang karaoke, went dancing, and saw some dinosaurs.

At the beginning of December, all Peace Corps Volunteers and our counterparts traveled to UB for an In-Service Seminar held at the Park Hotel. The purpose of this? To strengthen work relationships between PCVs and counterparts. Our schedule was packed leaving no time to venture outside. We had Mongolian language class; TEFL (Teach English as a Foreign Language) training; various sessions such as critical thinking in the classroom, running camps and clubs, classroom management and interaction, empowering people with disabilities, and gender equality and empowerment, plus many more. Sometimes we were together with our counterparts and often we weren’t. This went on every day from 7am to 7pm. I also still had my cold and was coughing incessantly. So much that I pulled a muscle.

It was an exhausting week with some wonderful moments: 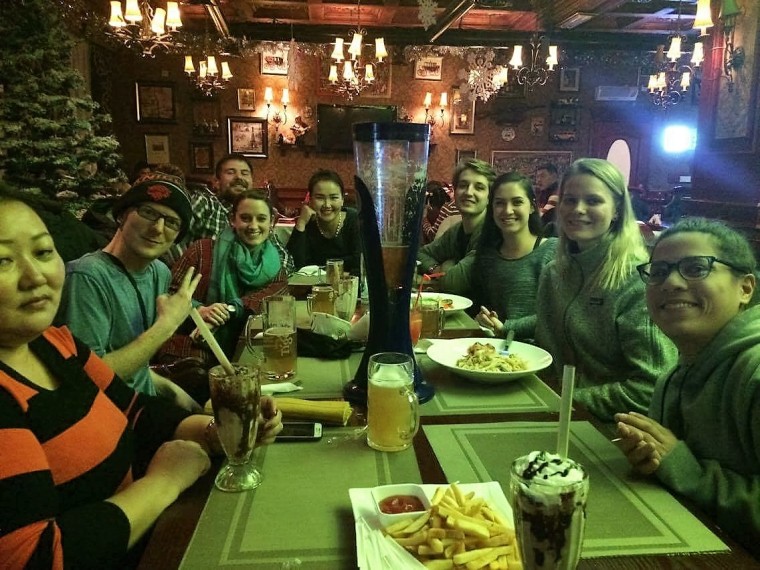 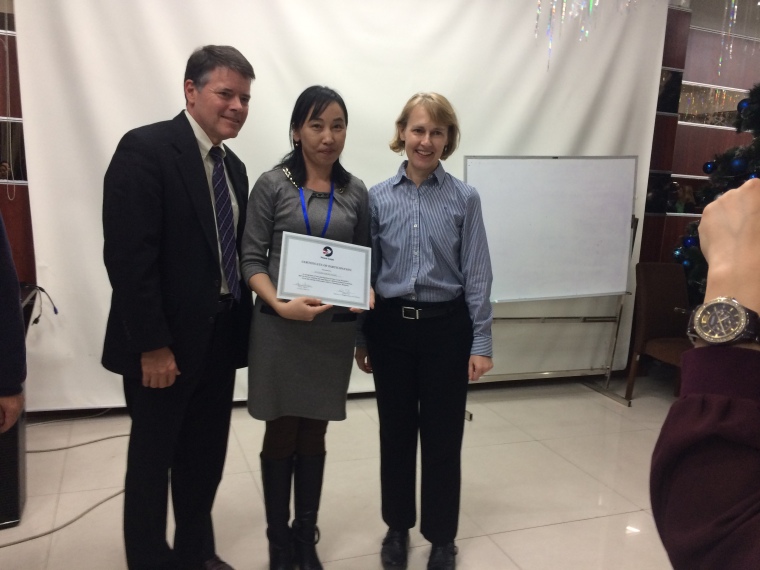 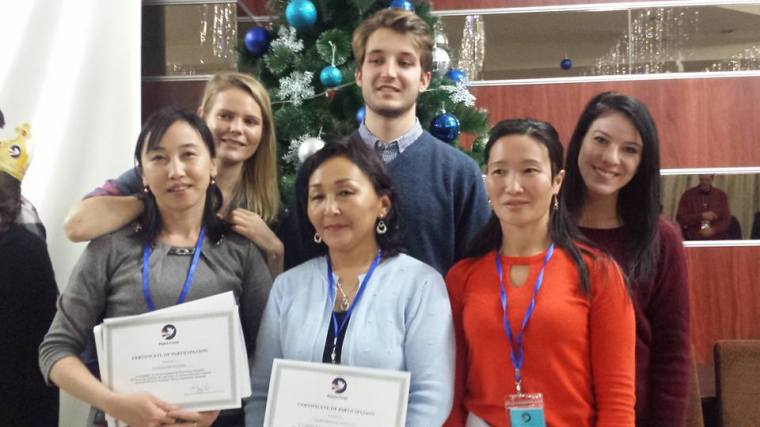 Now I’m excited for Christmas. I went on a wild goose-chase as I searched high and low to find Christmas lights in my aimeg. I got lost in a labyrinth-of-a-building and when I finally found an exit, I saw a man selling lights at his stall right outside. Now, my apartment is twinkling with red, blue, and green lights hanging over my window and bed. My stocking is hanging on my door and my advent calendar from home is propped up on my coffee table. 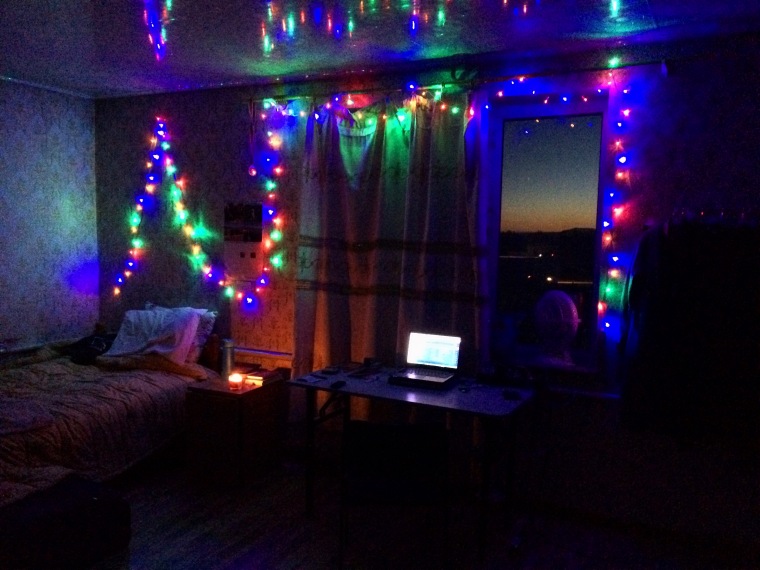 Good things have happened but I have had my frustrations as well. Let me first tell you about my apartment. The repair man has become my new best friend. He has had to replace my radiator which exploded while I was away in Khentii and then he had to replace a radiator in my bathroom which exploded while I was away in Bayankhongor. Then when I came back from UB, my bathroom was leaking again. Notice a trend here? I finally told the repair man to just switch off the heating going into my bathroom because I just can’t be bothered anymore.

An immigration officer paid me a surprise visit at my school. She demanded my passport and my alien card. Like I just casually carry my passport around wherever I go. Then she said that she wanted to take it away with her to which I firmly said no and made her take a photocopy instead.

Trainwreck was an awful movie. So much hype of people telling me how funny Amy Schumer is.

I get really depressed when I see injured dogs and puppies limping on the streets.

“As long as you live, there’s something waiting; and even if it’s bad and you know it’s bad, what can you do? You can’t stop living.”

I have sometimes thought to myself, “What is the point? I can just go home.” But I like it when tiny 5th graders come running out of their rooms to say “Hi,” when I walk by. I like it when students wave at me when I’m outside. I like it when I witness a counterpart doing a good job in the classroom. The best thing that can happen is when lesson planning goes well. Lastly, I am happy for the friends I’ve met and all the phone conversations we have when we’re apart. 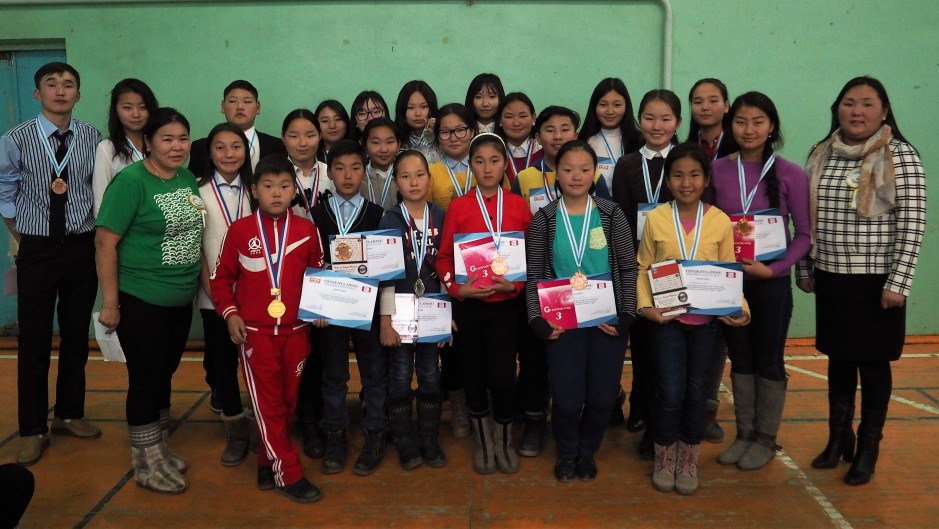 I stumbled out of my apartment building Friday morning at 7am, the only source of light being the car’s headlights. Despite the early hour, I managed a cheerful “Сайн байна уу” to the driver to which I only got a grunt in response. With my blue backpacking bag filled with snacks and clothes that was tossed into the trunk, my pillow, and camel blanket, I folded myself into the small car. I was on my way to Khentii, the birthplace of Chinggis Khan, with 20 Bookbridge students and my PCV site mates, Perrin and Jenni, for an English Festival. 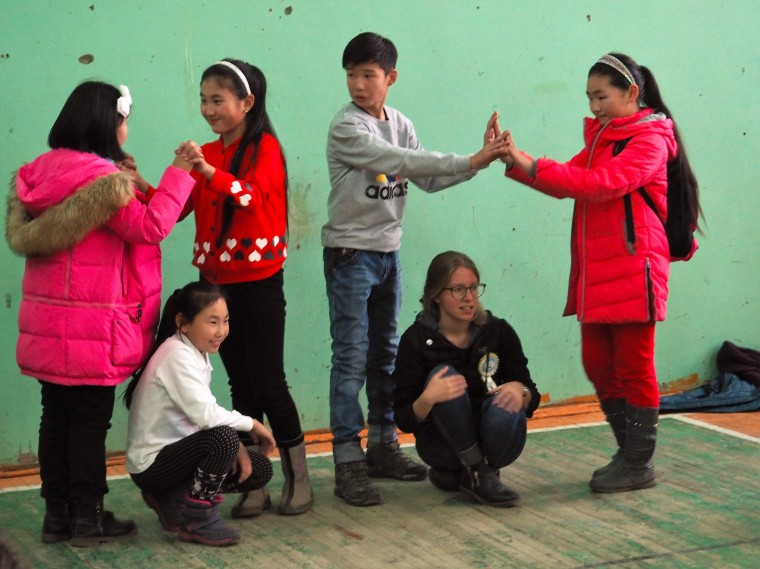 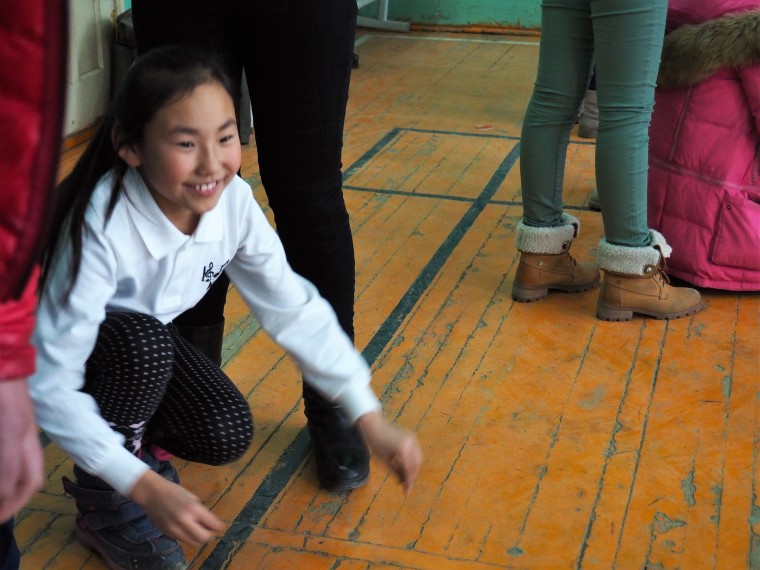 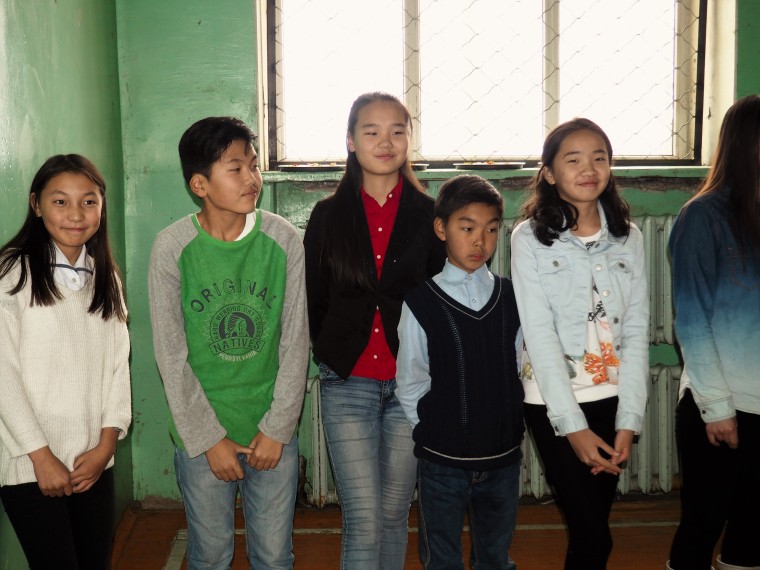 We left with two cars, the small car I was in and a Russian meeker that had 20 people crammed in. They looked like sad cows going to the slaughter. I thanked my lucky stars that I wasn’t in that meeker with them. My long legs wouldn’t have forgiven me. When we left our aimag, the sun was a red orb rising over the plains like a scene from The Lion King.

It was a tough journey. The drive to UB took nine hours, two hours longer then it would have taken by bus. We kept making stops because of the meeker driver. Nobody knew what his problem was. He was making far too many stops and driving at a sluggish pace. It was an agonizingly slow drive. I munched on peanuts, craisins, and carrots as my IPod played on shuffle.

That’s because of the great plumes of steam and smoke erupting from chimneys, factory smoke stacks, and the ger district, creating a lovely blanket of smog that caused the city’s skyline to disappear. Transitioning from empty roads we were suddenly hit by a blitzkrieg of bumper-to-bumper heavy traffic. Terrifying when traffic laws are heavily lax here. We were making a left turn when another car thought it was a great idea to push a little harder on his gas pedal nearly crashing into us. But our driver was like, “NOT TODAY!” and stoically evaded the car while I nearly shitted myself in the back seat. I held on a little tighter to my pillow as if that would do something. We made some more stops in the city. Sadly, none of the stops was at a coffee shop and we resumed our journey out of the city and onto Khentii.

During the second part of the drive, it was pitch black with stars guiding our way. Cars in the far distance looked like fireflies as they descended from the hills; their car lights a small bright light in the murky blackness. We arrived in Chinggis Xot at 1 am due to the slow meeker driver. We had to chug behind him at snail’s pace to stay close to the students. At one point, we were driving 25 miles-per-hour.

PCVs stayed with other PCVs in the aimag while Bookbridge students and faculty found their own accommodations. The lovely Phoebe and Mission, the cat, took me in for the weekend. On Day 1 of the English Festival, Bookbridge students from my aimag united with Bookbridge students from Khentii’s aimag. They all took a one-hour test that Jenni, Perrin, and I created for different grade levels. Our tests were vastly different from Mongolian tests because there was more writing and open-ended questions to avoid cheating. More than half did very well. Later in the afternoon, Khentii PCVs organized games for the students and there was an awards ceremony. Students with the top scores received medals, a certificate and an English grammar book. Afterwards, we disbanded. Students were still exhausted from the long drive. During Day 2 of the festival, students played basketball and volleyball in the morning, we went over test corrections in the afternoon, and then watched Harry Potter and the Sorcerer’s Stone in the evening. 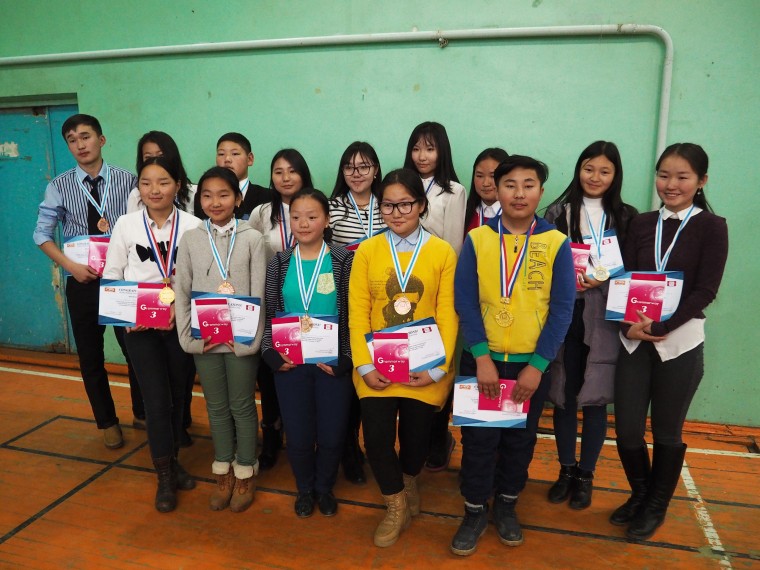 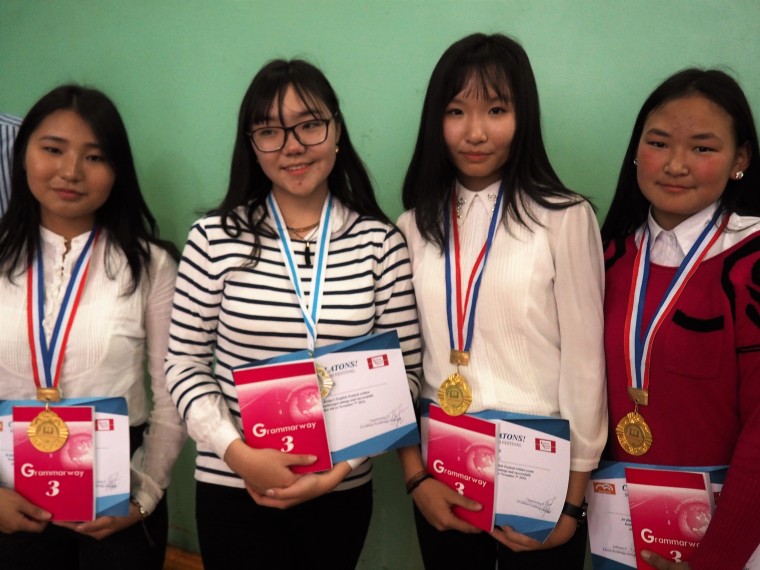 We didn’t leave Chinggis aimag until Monday morning at 9 am. Before entering UB, we hopped out of the car for a few minutes to gaze upon the enormous Chinggis Khan statue. With daylight we could also see the landscape that escaped us Friday night: flat with small hills and eagles that sat puffed up on the snowy ground. In UB, we had a two hour break and spent it in E-Mart, a Korean superstore. I devoured a large pizza for lunch. The traffic was so bad. It took nearly two hours to get out of the city. We didn’t arrive back home until midnight. Our driver must have been exhausted from driving all day and night. I kept a wary eye out for him just in case.

“Are you keeping an eye on him?”

“It’s hard to tell if he’s swerving because of all the potholes.”

It was a nerve-wrecking ordeal. Trucks with their headlights blinded our eyes and horses standing at the side of the road wouldn’t materialize until the very last second, including three dead ones. We were all exhausted and I was happy to come back to my apartment. However, I came home to a leaking radiator. More on that thrilling tale to come later. 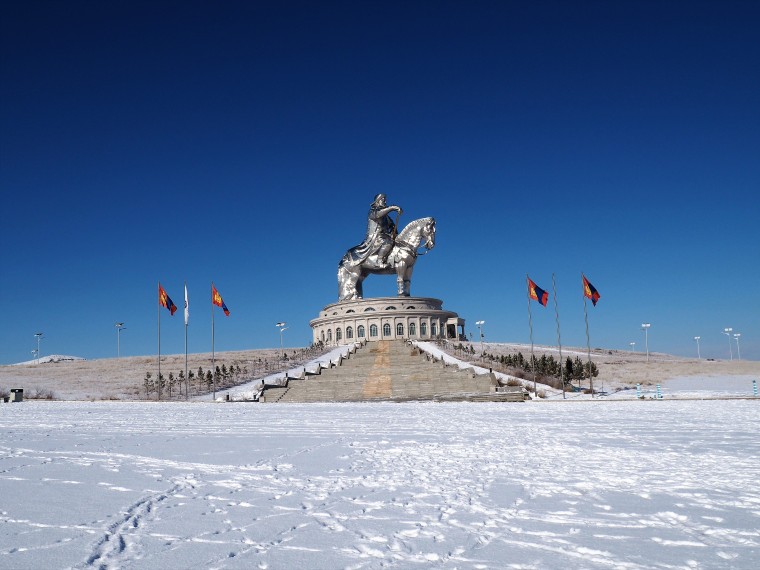 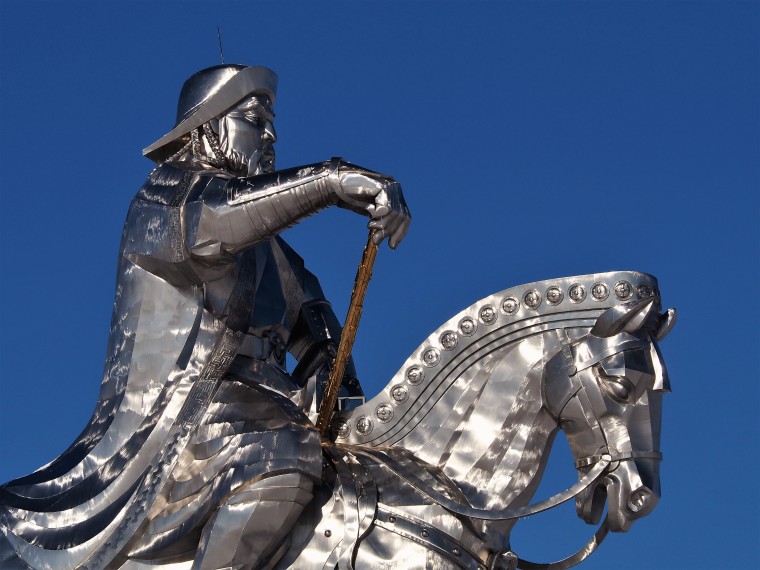 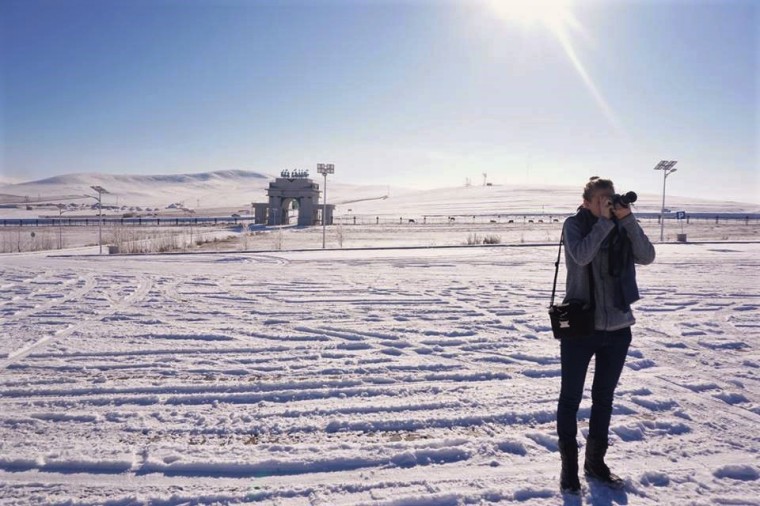