July was a dull month. When I flew back from Cambodia, all the adrenaline wore off as I took the bus back to my little town. It rained a lot. During the heavy rain storms, some of the rain would find its way through a small crack in my ceiling and slowly filter down my wallpaper. As I read in bed I could see the water stains over the top of my book slowly evaporating to a dark stain, thus making the ugly wallpaper even uglier. July consisted of a plethora amount of baking, watching movies, reading, and spending time with my site mate whose Peace Corps service was coming to a glorious end. The only highlight was wearing my new deel to Naadam where I watched some of the events, wrestling and archery, but that only holds my attention for so long. The whole entire time I was counting down until August.

For two-weeks, I explored the Gobi Desert and Ulaanbaatar with my mom and dad. 14-months was the longest I had gone without seeing them. I was extremely happy to see them and to hear Swedish being spoken again.

My parents visited Mongolia through a travel agency called Nomadic Expeditions. The agency had a two-week travel itinerary planned that took us around the capital city and throughout the Gobi. Our group consisted of only five people: the Buchanan family, a female traveler called Billy, and our tour guide, Tseveen. We had been expecting more people but were delighted with our close-knit group. We even managed to squeeze in some invigorating and competitive games of Heads Up during the evenings. 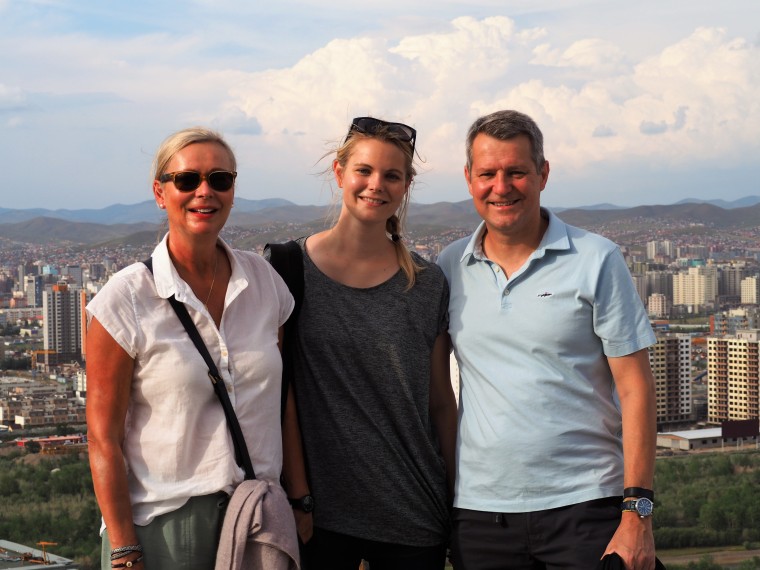 While in UB, we stayed at the Shangri La. One of the nicest hotels I’ve ever stayed in. I traded the slab of concrete I sleep on for a bed that felt like a cloud, 15-second cold showers for long hot showers, wifi, and I could watch TV, (HBO!!!) I had trouble sleeping my first night because I wasn’t used to the comfort. The hotel also connects to the Shangri La Mall. Without needing to go outside, we wandered over for shopping and the movie theater.

I will first write briefly about what we saw and did in the city.

We visited three temples. The first was Gandantegchinlen Monastery, the center of Mongolian Buddhists. There are 150 monks currently residing at the monastery. The second one was Choijin Lama Temple. This temple is situated right in the middle of the city, surrounded by new buildings such as the Shangri La and the Blue Sky. A perfect example of old vs new in UB. When you look upwards, you can see the angles and faded colors of the temple roof alongside the blue glass of the city’s skyscrapers. The third temple was part of the Winter Palace which is also a museum. All the temples are lively with various colors and carvings of faces and animals on the roofs. Furthermore, we visited the National Musuem and an art museum plus the Winter Palace.

Over the Peace Bridge, there is the Zaisan Memorial for Soviet soldiers killed in WWII.  At the top, is a panorama view of the whole city. We also met an eagle.

We also spent a night at Hustai National Park. Despite the rain, we drove into the park to see Mongolian wild horses also known as Przewalksi’s horse. As we drove, we spotted eagles, falcons, and fat marmots. Our driver had eyes like a hawk because even while driving he spotted the horses in a nanosecond. The first time I couldn’t see the horses even with binoculars but 20-minutes later we came across two-herds grazing near each other upon the hillside. They’re very small and yellow like small smudges. We weren’t allowed to get to close. 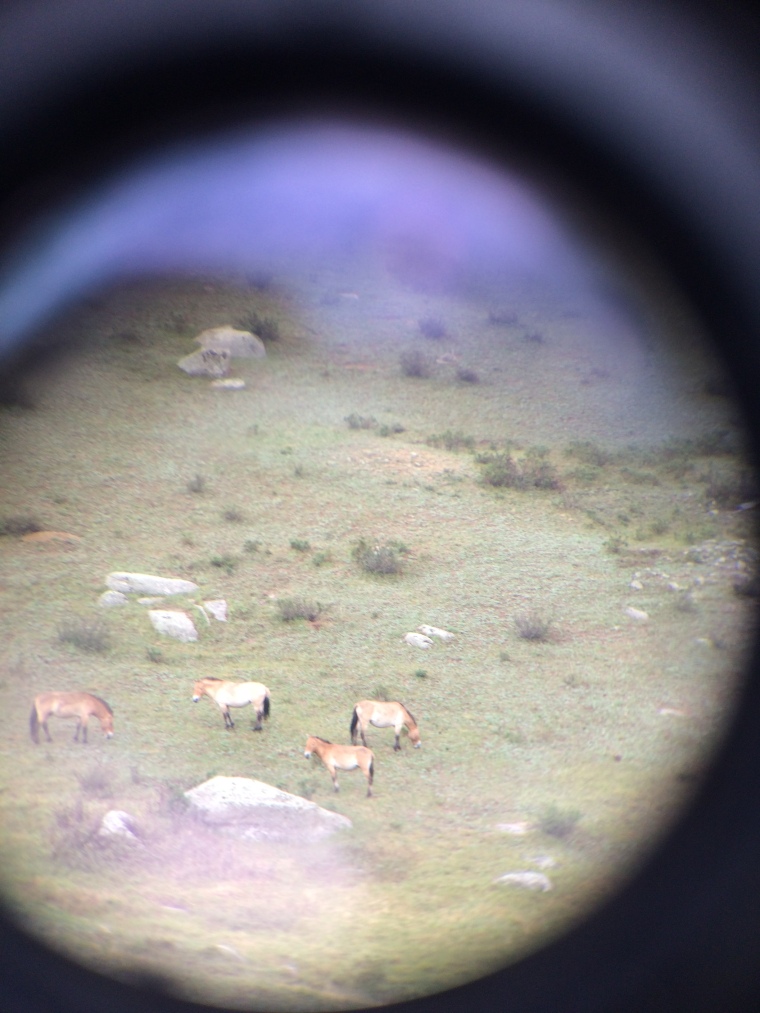 We had to leave at 4:30 am for the airport. We flew a small plane for an hour and 20 minutes from UB to Ömnögovi province. I was dozing away for the most part but when I was briefly awake, I could hear English, German, and Japanese being spoken. Two cars met us and for another hour we drove over bumpy grassland to the Three Camel Lodge, one of National Geographic’s unique lodges of the world. It is also the most luxurious ger camp in Mongolia. Each ger is named after an animal. I stayed in the Pallas Cat while my parents stayed in the Snow Leopard. In addition, there’s a lounge with a bar, a dining room, an entertainment lounge, and a massage ger. However, there is no internet or cell service. Not too far away from the camp is a watering hole where herds of horses would come stampeding for along with goats, sheep, and the occasional cow. There is absolutely nothing as far as the eye can see. No roads, no telephone lines, no billboards. Just the flat Gobi grasslands stretching all the way to the Altai Mountains.

We did a lot while traversing the desert. While walking, lizards skittered around our feet diving for cover, small gazelles leaped through the grass, and we even spotted a small snake slithering away, (much to the delight of my dad).

On day one, we hiked up to the top of hills and saw petroglyphs. Immediately following the hike, we biked back to the lodge. Due to the bumpy trail, my arms became sore from all the shaking and my fingers were clenched tightly over the handle bars as I fought to make sure I didn’t go flying off.

We didn’t just stay at the Three Camel Lodge. On days two and three, we were driven in a circular route that took us to new sites. The sights were incredible. Sand dunes on one side with the Altai Mountains cresting on the other.

We met a nomadic family. This family we met was even larger than expected because family was visiting from central Mongolia. My parents drank airag for the first time and saw how nomadic families survive by milking their horses and goats, using solar panels for electricity, and using a car battery to watch TV. Mongolian horses are very skittish. This family had a large herd and we watched one of the boys trying to break a new horse but falling in the process. 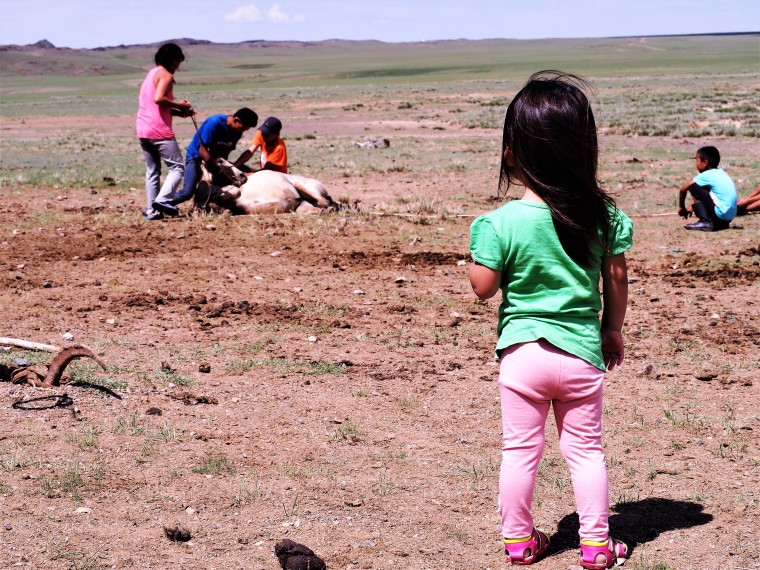 During the night of day 2, we slept in tents. I was laughing at the image of my mom sleeping in a sleeping bag. The temperature dropped as we were out there and it rained but I thought it was incredibly cozy. Our camels arrived that night.

On day three, we rode camels. I had the largest camel but the saddles aren’t soft. Just pieces of felt layered on top of each other. Me and my camel, Alfonzo, were comfortable walking at a slow gait but the 15-year-old wrangler kept speeding my camel up causing my rear end to be rubbed raw. We spent three hours riding our camels. The camels have a piece of wood through their noses with a rope attached. I think it looks painful but camels have high pain tolerance. For the first hour, we were clumped in a group holding on to each other’s ropes as our camels walked over small sand dunes but then we were left to guide our own camels once we reached flat ground. My lazy camel lumbered behind the others knowing I had absolutely no control over him. Camels are strange animals. They look very smug with their slanted eyes but also look like small giraffes because of their long necks. Then when they turn their heads back to look at you, it’s very snake-like. When we finally stopped three hours later, I had to topple off my camel. I was too sore to lift my leg over the hump. We were asked if we wanted to continue riding after lunch but nobody said yes.

We spent the night at Gobi Erdene, another ger camp. Sort of like the Three Camel Lodge but not as luxurious. This ger camp conserves its electricity all day by only turning it on at 7 pm. As soon as the clock struck 7, it was humorous to watch everyone come walking into the main building to charge their phones and cameras.

On day four, we drove from Gobi Erdene to the Singing Sand Dunes. Ditching our shoes at the base of the 600-foot sand dune, my confident gait up the dune quickly transitioned into a battle-weary crawl on my hands and feet. If it wasn’t for my dad I don’t think I would have made it to the top. Or it would have taken me significantly longer as I had to stop every 10 steps as the dune became steeper to climb and I struggled to breathe. Once at the top, I was happy to just sit upon the spine that ran between the top of the dunes.

I saw enough horses, camels, goats and sheep to last me a lifetime. During day five, at a Naadam festival, which was plopped down in the middle of nowhere, we watched camels being milked, baby horses were being wrangled up, and the sheep were getting their fur sheered. This wasn’t a real Naadam. The contestants were all children who were using this day to practice wrestling, archery, and horse racing. But I’m happy my parents got to see the festival even though it wasn’t a genuine one.

Day six was my favorite day. We walked through a park but I can’t remember the name of it anymore. The park was beautiful. The hills had rocky crags at the tops. Small rivulets of a stream criss-crossed its way through the valley. I gave up on trying to keep my shoes dry every time we had to cross from one side to the other. Small Pikas were running around. They are like a chipmunk/mouse hybrid with large ears who squeak, “Pip pip!” I call them Pikachus.

On our last day in the Gobi, we visited the Flaming Cliffs. So called because when the sun is shining, the cliffs glow red. But it was cloudy as we were there and later we had to leave earlier than expected because of a lightning storm. The Flaming Cliffs is where the world’s first dinosaur eggs were discovered along with many more dinosaur archaeological finds. If you look and dig around closely you can find tiny miniscule pieces of dinosaur eggs. 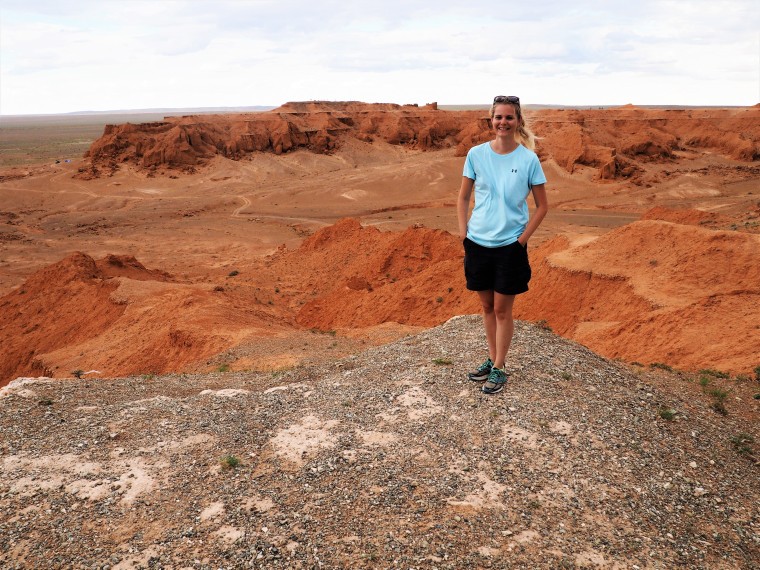 When we returned back to the city, all our phones dinged with all the messages and emails we couldn’t look at while in the desert.

The trip was for two-weeks but my parents stayed for two extra days. We walked more around UB, went shopping, and saw a film. I was so pleased they came to Mongolia. Visiting via Nomadic Expeditions was perfect because we were comfortable as we traveled and there was something new every day. But what was nice was how the itinerary wasn’t jam-packed with too many activities. We still had plenty of down-time and relaxation. The whole trip was perfect and I came back to my town a few pounds heavier from all the food I devoured.

I hope you can view all the pictures. Internet is very poor where I am.